Market wobble threatens to turn into a quake

Global markets have been hit this week – and hit hard. A combination of the end to ultra-loose central bank monetary policy, global trade tensions and underwhelming corporate results are making investors fret that the 10-year economic expansion may be on its last legs. Already this year, the Euro Stoxx 50 equity index, a benchmark for large European companies, has fallen 11 per cent. The FTSE 100 – down 10 per cent – isn’t doing much better and China’s CSI 300 is languishing 21 per cent lower than at the start of 2018. Up until this week however, US indices remained the last bastions against a turning economic cycle.

Unfortunately, at the hands of the technology behemoths, most notably Amazon, Alphabet and Snap, the US stock market has finally entered negative territory for 2018. On Friday alone, Amazon shares plummeted by 8 per cent following the issuance of lower than predicted sales growth figures for this year’s holiday season. To put the deterioration into perspective, almost $200 billion dollars has been wiped off of Amazon’s market capitalisation since it briefly breached a $1 trillion valuation two months ago. Google’s advertising business is showing signs of underperformance, leading to a sell-off in its parent company, Alphabet. Meanwhile, shares in Snapchat’s parent company fell by over 13 per cent following warnings that user growth would fall for the third consecutive quarter. Over the past decade, investors have flocked to the American tech heavyweights, resulting in soaring (and ultimately unsustainable) share prices. When the economy shows signs of retraction, investors get jittery and irrationally overpriced assets tumble back to more reasonable levels – with painful consequences. 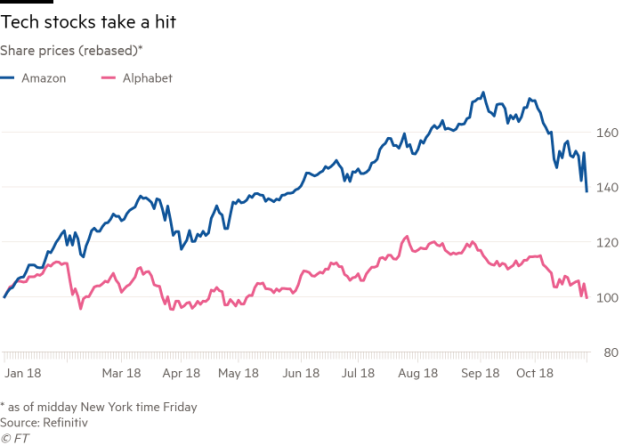 The S&P 500 and the tech-heavy NASDAQ indices came under pressure this week as a number of companies highlighted potential headwinds to future earnings. The most prominent concerns include President Trump’s protectionist trade agenda, the prospects of further rates rises by the Federal Reserve and a rather gloomy outlook on global growth.

Those of a free-market capitalism ilk attest that trade barriers (such as tariffs) distort the importing and exporting of goods and services, leading to an inefficient allocation of resources. Inefficiency ultimately weighs on corporate profit and, accordingly, share prices tend to fall. In terms of hawkish Fed policy, higher interest rates increase the cost of borrowing for companies – directly reducing corporate earnings. Higher rates also prevent companies from taking on additional debt and capital expenditures. The US equity pullback stems from the combination of the speed of monetary tightening and the uncertainty surrounding just how aggressive the Fed can be without triggering a contraction.

There were a few winners in the pack however, most notably Ford and Twitter. Following impressive corporate earnings reports, Ford stock gained 10 per cent on Thursday and Twitter jumped a remarkable 15 per cent.

The CBOE Vix index of implied equity volatility touched 27.5, only a hair’s breadth away from an eight month high hit earlier this month. The Vix index – investors’ so-called “fear gauge” – is a widely used measure of market risk. The metric surges when volatility enters equity markets. Interestingly (or perhaps worryingly) the frequency at which this index is spiking has been growing in recent months, after being relatively dormant for a number of years.

The yield on 10 year US Treasury bills ended the week down 13 basis points at 3.08 per cent. Following the broad equity sell-off, outflows in US stocks led to inflows in fixed-income securities. The increased demand for Treasury bills puts upward pressure on the price and downward pressure on yields (prices and yields move in opposite direction).

Elsewhere, Italian bond yields ended a topsy-turvy week at 3.5 per cent – down 28 basis points from last week’s 7 year high. The spread between Italian bonds and their German counterparts – a widely used measure of Eurozone stability – has risen precipitously in recent weeks. This follows the populist Italian government’s announcement of a 2.4 per cent budget deficit. The planned deficit is three times the previous announcement and a clear violation of EU budgetary rules. The announcement has not gone down well in Brussels and the increased political rhetoric between the EU and it’s third largest economy has caused a broad sell-off of Italian bills. Matters were not helped by the fact that Moody’s, a rating agency, downgraded Italy’s credit rating to just one notch above junk territory last week.

The pound lost ground against the greenback this week amid lingering uncertainty surrounding the possibility that prime minister Theresa May could be facing a leadership challenge. Meanwhile, the dollar index also end the week down to 95.93 as a result of the continued US equity rout. The Euro had a volatile week as concerns of a fallout between Rome and Brussels continue to intensify. The single currency ended the week one per cent lower at $1.1405 to the dollar.

On Friday, China’s renminbi touched Rmn6.95 to the dollar – its weakest level since 2008. The currency has now slumped more than 9 per cent against the dollar this year. A combination of the Fed’s rate rising agenda and fears of an ailing Chinese economy are believed to be behind the capital outflows. When the Federal Reserve raises interest rates, US debt becomes more attractive to investors. Accordingly, capital flows from abroad into the US economy and foreign currencies (such as the Chinese renminbi) depreciate.

Brent crude hit a two-year intraday low of $77.11 a barrel on Wednesday before ending the week at $77.62. Just three weeks ago, Brent touched a four-year high of $86.74. The 12 per cent turnaround is substantial, even by the standards of this inherently unstable market. Both Saudi Arabia and Iran – two of the world’s biggest suppliers of oil – have successfully alleviated investor concern about insufficient production capacity. An increase in supply of a good causes its price to fall as it becomes more abundant.

There are a whole raft of economic releases due this coming week. Investors will be focused on the eurozone third quarter GDP results and the purchasing manager index (PMI) surveys from the UK. Across the Atlantic, the latest batch of US job data is released on Friday. Any dip in employment good stoke fears that growth is beginning to wane, despite the huge Republican fiscal stimulus in 2017.

On the corporate front, investors will be looking towards Apple and eBay numbers after Amazon and Alphabet results left much do be desired. Over the past decade, technology has been the forerunner in the US economic expansion. Any hint of ailing performance could send share prices tumbling.

Second photo provided by The Economist