US Government Shutdown, Fed Policy and (of course) Brexit

A lot has happened since the last instalment of the St Andrews Economist weekly rundown. Following a decidedly choppy end to 2018 for many asset classes, financial markets steadied ship in January. America endured the longest government shutdown in history, with some government workers going 35 days without pay, before President Trump begrudgingly succumbed to demands from the Democrats. Violence and social unrest at the hands of the Gilet Jaunes has alienated the right-leaning president Emmanuel Macron from the French public. Chinese state interference in private enterprise has faced ever-growing reprisal from the West, not least due to many Chinese conglomerates being structurally integral to much of the West’s technological infrastructure. The Federal Reserve has changed course on its hawkish monetary policy against the backdrop of a global economic slowdown and Sino-American trade ructions. Tory, Labour and – to a certain extent – European intransigence has left Britain on the precipice of crashing out of the EU without a deal on March 29th. Such conspicuous issues have metastasised rather than mellowed over the past few weeks. One can’t help but think that the more things change, the more they stay the same.

The Democrats’ refusal to fund President Trump’s $5.7 billion border wall with Mexico forced a 35-day government shutdown. However, Mr Trump’s initial inflexibility, followed by an eventual U-turn, has had a twofold impact on the President’s dwindling credibility as a dealmaker. Firstly, as the shutdown continued into its third, fourth and fifth week, the President’s popularity continued to plummet. Some 800,000 government workers had to forego two pay-checks, while Mr Trump fixated on the border wall funding. The daily images of snaking queues of government workers outside food banks did little to garner support for Mr Trump’s obstinance. Secondly, the non-partisan Congressional Budget Office estimates that the shutdown will knock $8 billion dollars off of US GDP for the end of 2018 and start of 2019. Many analysts already fear a slowdown in US economic growth and Mr Trump’s fixation on a Mexico border wall has not gained much traction on Wall Street.

Earlier this week, the Federal Reserve announced that it would maintain the target interest rate at 2.25 – 2.5 per cent, much to the relief of financial markets and President Trump. With the leading politicians, philanthropists and business magnates descending on Davos for the annual World Economic Forum, the general mood was decidedly less buoyant than in 2018. The IMF, World Bank and many think-tanks have revised downward their world GDP forecasts as the aforementioned headwinds begin to take a toll on capital markets. As such, the Federal Reserve opted for a more dovish stance on monetary policy and even opened up the idea of reducing interest rates should conditions further deteriorate. Since 2016, the Federal Reserve has steadily increased interest rates and unwound its post-crisis quantitative easing stimulus policy. Traditionally, central banks follow a policy of monetary tightening during economic upswings in order to prevent an economy overheating and as a means of creating room for rates to fall during the next downturn. The Fed’s shift away from monetary tightening has proved contentious, some arguing that the economy is strong enough to accommodate higher interest rates and others worrying that the Fed will stifle economic growth if it continues to hike rates.

US equities had a respectable week following the release of strong economic data and better-than-expected corporate earnings reports. The S&P 500 stock index ended the week up 2.6 per cent, with the tech-heavy NASDAQ and the blue-chip Dow Jones Industrial Average both gaining over 1.25 per cent. Buoyant equity performance followed a report that 304,000 jobs were added to the US economy last month and the closely watched Supply Management manufacturing index far exceeded analyst’s expectations. Many firms announced bumper earnings for Q4 of 2018. The big winners were General Electric and Facebook, the former surging by 18 per cent and the latter by 11.5 per cent in Thursday’s trading. One noticeable disappointment was Amazon’s decline of 5.4 per cent following a reduction in sales growth while costs continue to swell.

Sterling continues to be volatile, chiefly due to the uncertainty surrounding the UK’s future relationship with the EU. On Friday it was announced that British manufacturers are building up their inventories at the swiftest pace since records began – a further sign that businesses are stepping up their no-deal Brexit contingency plans. The pound lost 0.32 per cent against the dollar following the release of the manufacturing report. A further sign that Brexit uncertainty is manifesting itself in real economic data and real business decisions is the news that Dyson – one of the UK’s largest private companies – is moving it’s headquarters to Singapore. Although founder James Dyson insists that the decision is unrelated to Brexit, the news does nothing to quell concerns about the diminishing role of British manufacturing in the event of the UK crashing out of the EU with a bad – or no – deal.

The dollar and Euro remained stable for the week.

Brent Crude ended January up by 14 per cent after a tumultuous few months which saw the commodity touch $86.74 per barrel in October of last year, only to fall an astonishing 42 per cent to $49.93 on Christmas Eve. President Trump has continually called for higher oil prices and a voluntary reduction in Saudi Arabian production, coupled with a forced reduction in recession-stricken Venezuelan production has contributed to the 14 per cent surge. When the supply of a good is reduced with the demand unchanged, its price increases as those in demand are willing to pay more for the scarce good. 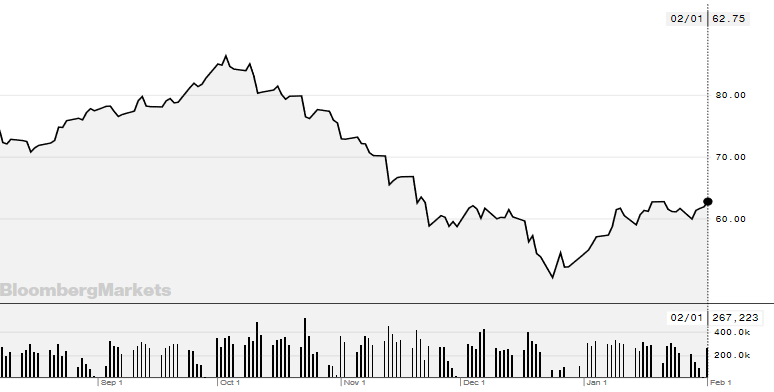 Gold ended Thursday’s trading at a nine-month high of $1,320 an ounce. Traditionally, gold is seen as a haven asset, tending to move in the opposite direction to equities. In times of economic uncertainty, investors move capital from riskier assets into gold. Furthermore, 2018 saw central banks purchasing gold at the highest rate in over half a century, with Russia, Turkey and Kazakhstan being the prominent proprietors. A surge in demand without a change in supply, is met with higher prices.

President Trump will deliver his State of the Union address on Tuesday. Although widely-believed to be focused on immigration, investors will still be hoping for signals of Mr Trump’s legislative priorities for the forthcoming year.

The Bank of England will release its inflation report and growth forecasts. Against the backdrop of Brexit uncertainty, analysts will be listening carefully to Mark Carney’s assessment of the UK economy.

Earnings seasons continues into next week with some big hitters, including Google, Walt Disney, Twitter and General Motors reporting their Q4 2018 results.

Politics this Week, The Economist:
https://www.economist.com/the-world-this-week/2019/02/02/politics-this-week