Last year, China’s central bank announced that they were researching the implementation of their own digital currency. They are not alone in their pursuits. In 2018, Venezuela launched its cryptocurrency, the Petro, in an ultimately unsuccessful attempt to control the hyperinflation of its fiat currency, the Bolivar. Uruguay and Sweden have also conducted pilot tests of digital currencies. Even Facebook has announced plans to launch their Libra cryptocurrency later this year. Additionally, in a survey conducted by the Bank for International Studies of central banks in both advanced and developing economies, 70% responded that they are “currently (or soon will be) engaged” in researching a central bank digital currency (CBDC).

A CBDC can take different forms, but in its essence it is a type of money with transactions taking place through an electronic platform. The main difference in functionality from a printed currency is that instead of paper, your money is represented as a string of ones and zeros.  However, with a short history obfuscated by a milieu of technological terminology, it is difficult to evaluate the economic and political effects of a CBDC available to the general public. Already, concerns have been raised for consumer privacy, the potential influence on monetary policy, and possible interference with private banking. Answers to these questions depend upon one major component of its implementation: the technology employed.

There are generally two different methods through which a central bank can issue a digital currency to the general public. They can either issue it on a token basis, or through an account at the central bank. The token basis would be more akin to how both printed currency and cryptocurrency function, while the account option would operate much like a deposit account through a commercial bank. 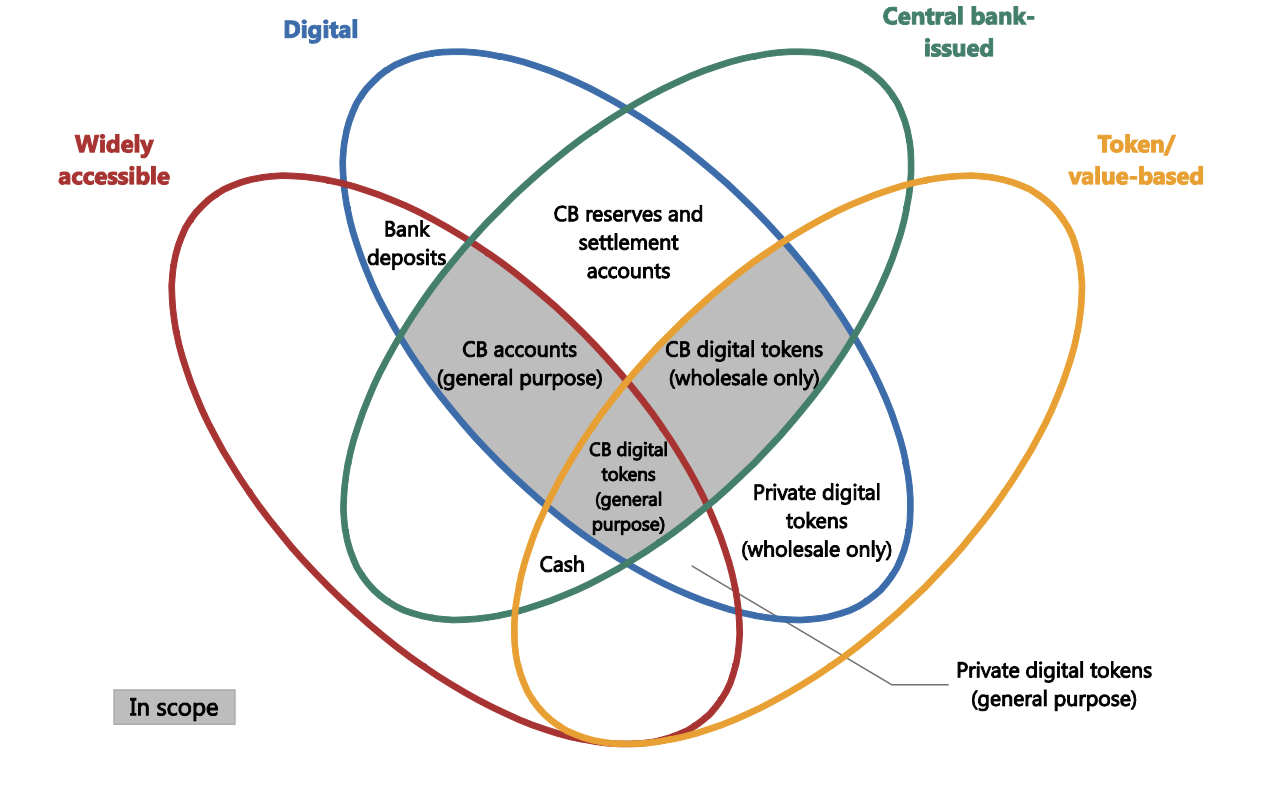 A token-based digital currency would employ some form of distributed ledger technology, meaning that every user has a copy of the ledger of each transaction conducted. This would enable more decentralized, peer-to-peer transactions while still allowing the central bank to be the issuer of the currency. This technology would also allow for anonymity in transactions, quelling concerns of a government intruding into consumers’ privacy. However, in nations where corruption and black market dealings are rife, this may appear as a drawback rather than a benefit.

In the account-based method, the central bank would maintain the ledger of an individual’s account balance and all transactions would pass through the bank as an intermediary. This scenario also poses a privacy issue, but now alongside another puzzling possibility: should the central bank pay interest on these accounts?

Some economists have already explored this very question, with their research indicating that interest payments on these accounts has the potential to cause much disruption for the private banking system. While they conclude that this form of CBDC would promote overall liquidity in the economy, it would crowd out ‘inside liquidity’ (credit or interest offered by private banks), forcing banks to raise interest paid on deposit accounts and thereby increase operating costs. This can also mean that the amount of investment within the economy is driven down to a potentially inefficient level. If central banks were to adopt this form of digital currency, they would inevitably need to weigh the benefits of increased interest rate payments on these accounts against concerns of crowding out private bank-financed investment.

A number of researchers have taken this principle further, identifying interest-paying CBDCs as a technology that may herald a new, more effective age of monetary policy. By phasing out cash for a CBDC, there would no longer be a non-interest bearing alternative to stop central banks from imposing negative interest rates. This would also mean that central banks would cease to have a positive inflation target, as the necessity for such a policy comes from the issue of interest rates being unable to fall below zero. Furthermore, targeting a consistent price level would cause fluctuations to the money supply to be flattened out overtime. Not only would a consistent price level help to empower consumers in decisions of expenditure and savings, but this technology opens up a route for new types of monetary tools. For example, lower income households could be targeted directly for monetary stimulus in times of recession.

This new technology obviously has much to offer in the way of transforming monetary policy, but at the cost of amassing an enormous amount of power within central banks and federal governments. In addition to the concerns of economic welfare, again the double-edged sword of government surveillance is drawn. On one hand, monitored transactions can detect and limit corruption, so long as the surveying powers are not corrupt themselves. On the other hand, such observation from a central government can strengthen the hegemony of authoritarian regimes, while also allowing for even more extensive capital controls.

What does all of this mean for the future of currencies? With the exception of a few governments named above, we are unlikely to see any significant changes in national currencies anytime soon. More research is still necessary to determine the full impact a CBDC would have on monetary policy and the private banking sector. Moreover, the finer details of this technology are far from being perfected. However, if it is implemented, an innovation of this magnitude is like any other: it has the capacity for good just as much as bad. Whether or not CBDCs will bring about economic egalitarianism, or a new age of authoritarianism, is an evolving question.

The opinions expressed in this article are the author’s own, and may not represent the views of The St Andrews Economist.