Despite another volatile week for Europe’s fourth largest economy, Italian bond yields ended on a five-year high of 3.26 per cent. The populist coalition government forced through a plan that included a significant increase in public spending and a proposed budget deficit of 2.4 per cent, even though Italy already has one of the largest debt burdens in Europe. The far-right coalition of The Five Star Movement and The League appear determined to stick to their election promises but tension with the EU is unnerving investors – reflected in the higher yields.

On Wednesday, the Federal Reserve raised US short-term interest rates for a third time this year, predicated on the strength of the US economy. The Federal Open Market Committee increased the target range for the federal funds rate (the rate at which banks can lend reserves to one another overnight)  by a quarter per cent to 2-2.25 per cent, while teeing up a further increase in December. This marked a significant milestone in the post-crisis economic cycle as the Fed fund rate exceeded the inflation rate for the first time in a decade. Markets were relatively accommodative to the widely-expected rate rise as the Fed maintained its policy of forward guidance.

Argentinian assets remained volatile following the resignation of the country’s central bank chief after just three months on the job. After falling almost 4 per cent against the dollar, the peso recovered, settling down 2.4 per cent to 38.22 pesos to the dollar.

Wall Street had a relatively subdued week. Both the Dow Jones Industrial Average and the S&P 500 edged lower for the week, despite a pick-up in Friday’s trading. The gains follow inflation data revealing that the Federal Reserve’s preferred measure of inflation data, the core consumption expenditures price index (PCE), held steady at a six-year high in August. The PCE index has steadily risen in recent months, bolstering the case for the central bank policymakers to stick to their planned pace of interest rate rises this year and next.

Tesla shares plummeted by 12 per cent this week, following the announcement of a lawsuit by US regulators against founder Elon Musk. Mr Musk’s eccentric behaviour has wreaked havoc on Tesla’s share price in recent weeks, making it the most shorted stock in the US market. The latest twist in the Tesla tale revolves around the accusation of securities fraud after Mr Musk allegedly misled investors about plans to take the company private with a tweet in August. 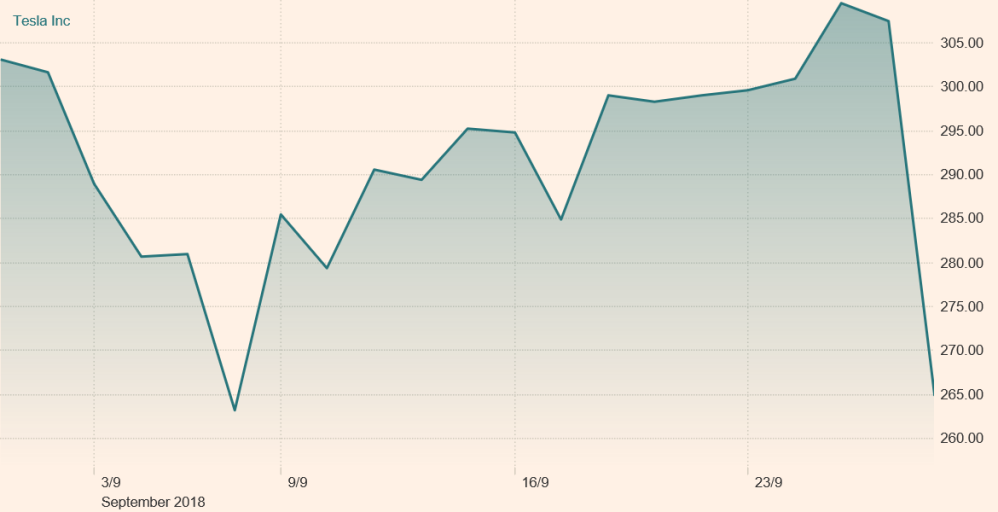 The sell-off in the Argentine peso intensified on Friday, despite an agreement made by the IMF to increase the Argentine bailout package by a further $7.1bn. The increase takes the size of the bailout to $57.1bn – the intranational lender’s largest ever. The peso tumbled 4.7 per cent to hit 41.15 per dollar, narrowly avoiding an all-time intraday low. President Macri’s effort to shore up the troubled economy by raising interest rates to 60 per cent doesn’t appear to have stemmed investor outflows. Concerns remain over rising US interest rates and the country’s high level of inflation and large trade and fiscal deficits.

The euro continued to weaken, slipping 0.8 per cent to $1.1641, having strengthened earlier in the week following positive comments from European Central Bank president Mario Draghi on eurozone inflation. The pound also continued to lose value against the greenback, down 0.18 per cent on the day at $1.3056.

The yield on the benchmark 10-year Treasury was down 1bp at 3.04 per cent and little changed after core inflation figures matched the forecasted 2 per cent. The yield on 10-year UK government debt slipped 2.5bp to 1.57 per cent.

Brent Crude rose steadily to $83.16 a barrel on Friday. This increase follows the world’s largest oil producers’ – led by Saudi Arabia and Russia – decision to ignore calls from Mr Trump to increase production. Supply shortages push up prices and investors are concerned about a return of $100 price tag for Brent Crude, not seen since 2014.